My first thought about this movie was, "Wow, I feel really bad for anyone who watched Dune without reading the book first! They must have had no idea what was going on!"

But upon further reflection, I thought, "Wow I'm so jealous of anyone who watched this without reading the book first! They must have had no idea what was going on!"

How do you adapt one of the best works of science fiction of all time to the screen, when it's greatness stems from an epic scope in themes, space, and time? One of the better directors of our time tried in a dazzling display of visual ideas wrapped with an abortion of a screenplay.

I say "ideas", because some of the visuals here are original, interesting takes on Frank Herbert's universe, but executed with inconsistent quality. The costuming and some set designs are beautifully detailed, but it's accompanied by laughably small backlot sets representing mountains or palace interiors. Some of the model work is good, but it's marred by awful uses of CGI for personal shields and retroactively adding blue to the actors' eyes. The physical depiction of the spice navigators, these creatures suspended in orange mist within giant boxes, is marvelous--but the way they "fold" space in CGI is hilariously bad. If one thing is perfect all the way, it's Toto's synth-rock score, equally balancing the mystic and futuristic quality of this universe.

All of this could be forgivable had the grand scale and thematic depth of the novel been translated on screen properly. It begins narration from a Princess who is practically edited out of the film, and thus totally out of place. But the worst issue is the pacing--wherein the first act, the "setup" for Paul's adventures, drags for the entire first half of the film. As a result, all of the most interesting aspects of Paul's personal journey--fighting for acceptance in the tribe, his romance, the gradual build of his mythical stature--all of it is rushed in a few scenes. Ecology, religion, sexuality; none of the rich thematic elements of Dune are ever communicated coherently. To someone who hasn't read the material, it's is incomprehensible. To someone who has, just disappointing.

I wish I didn't know how botched the potential of the story was so that I could just enjoy some David Lynch weirdness, a string of abstract images and sounds loosely held together by some mystical plot. But instead, I just wish Dune could get the great onscreen treatment that it deserves. Hopefully, Villeneuve can manage better. 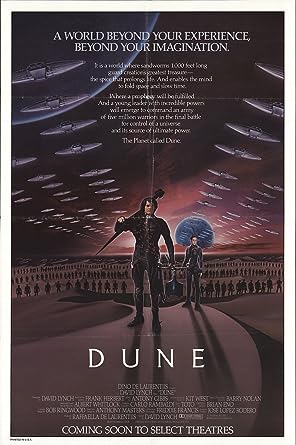 My Top 5 Reviewed Films on Letterboxd: